Thich Nhat Hanh was born as Nguyen Xual Bao, in the city of Hue in Central Vietnam on 11th October 1926. He came to be well-known as a Vietnamese Thien Buddhist monk and peace activist. He was also the founder of the Plum Village Tradition. He spent most of his later life in the Plum Village Monastery in Southwest France. He traveled internationally to give retreats and talks.

He was responsible for coining the term “Engaged Buddhism” in his book Vietnam: Lotus in a Sea of Fire. After living in a long exile, he was permitted to visit Vietnam in the year 2005.

At the ripe age of 16, Thich Nhat Hanh entered the monastery at nearby Tu Hieu Temple. In this monastery, his primary teacher was Zen Master Thanh Quy Chan That. He was a graduate of Bao Quoc Buddhist Academy in Central Vietnam. Thich Nhat Hanh obtained his training in Vietnamese traditions of Mahayana Buddhism. He also trained in Vietnamese Thien. He also received full ordination as a Bhikkhu in 1951.

Following this, he founded La Boi Press, the Van Hanh Buddhist University in Saigon. Soon he founded the School of Youth and Social Service (SYSS) along with the university. He also founded a neutral corps of Buddhist peace workers. These peace workers helped him establish schools in rural areas. They also helped Thich Nhat Hanh build healthcare clinics, and help rebuild villages. 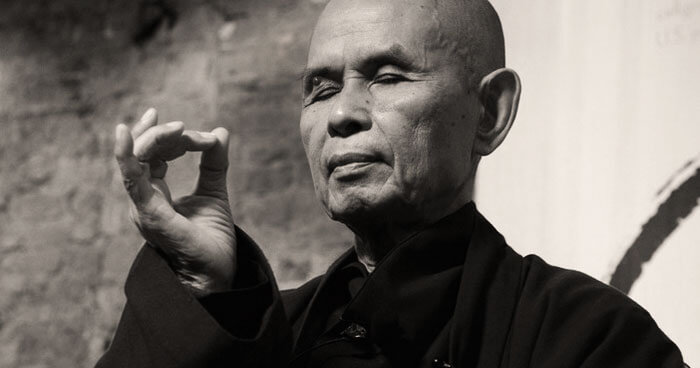 Thich Nhat Hanh’s combined a variety of teachings from Early Buddhism, Mahayana Buddhist traditions of Yogacara and Zen. He also induced ideas from western psychology. He taught virtues such as mindfulness of breathing. He also taught about the four foundations of mindfulness.

He presented the Prajnaparamita about “interbeing”. This presentation had doctrinal antecedents in the Huayan School of Thought. This is often said to provide a philosophical foundation for Zen. In September 2014, a little before his heart stroke, Nhat Hanh completed the new English and Vietnamese translations of the Heart Sutra. This is one of the most important Sutras in Mahayana Buddhism.

Some Thich Nhat Hanh quotes which were attributed to him are:

“We have to walk in a way that we only print peace and serenity on the Earth. Walk as if you are kissing the Earth with your feet.”

“Hope is important because it can make the present less difficult to bear. If we believe that tomorrow will be better, we can bear a hardship today.”

“There is no way to happiness – Happiness is the way.”

Thich Nhat Hanh had been nominated to receive many awards and he also received quite a few of them.

Nobel Laureate Martin Luther King Jr. nominated him for the Nobel Peace Prize in the year 1967. It so happened that the prize was not awarded that year. In 1991, Thich Nhat Hanh was awarded the Courage of Conscience award. The Miracle of Mindfulness is a 1975 book written by Thich Nhat Hanh. This book was written in Vietnamese and translated into the English language by Mobi Hoe. It is a manual on meditation.

From among the Thich Nhat Hanh books written by him, there was another book that received a lot of acclaims. It was named as An Appointment with Life: Sutra on knowing the better way to live alone. This is the earliest teaching of the Buddha on living fully in the present moment.

One does not have to detach himself from that society “To live alone”. It means to live in mindfulness. It also means to let go of the past and the future and to look deeply and discover the true nature of all that is taking place in the present.

It is a miraculous experience to walk on the ground, It is a miracle which you could perform every day. When was the last time that you mindfully walked with bare feet?